The most important part of any pump selection is determining the operating envelop of the pump. This means we must determine at the very least the required flowrate and head that will be required of the pump. This is often the first mistake that we make in the selection process. Especially in the wastewater world, the tendency is to select a pump(s) that can handle the hundred year flood. This often results in very large pumps that run for a limited number of hours but have a high number of starts and stops per hour. This causes the pump to fail because the motor windings burn up due to the high inrush current during the initial acceleration of the rotating unit during start-up, and the initial jarring of the windings due to the torque spike. The high flowrate also requires excess pumping energy due to the high velocity of the liquid in the piping leading higher friction levels causing wasted power. To avoid this problem several smaller pumps piped in parallel system that can be turned on sequentially as demand rises are often a better option than one or two large pumps. Alternatively variable speed drives can be installed to lower the speed of the pumps allowing the pump to operate at a lower flowrate during times of lower demand. (More on these two options later).

The flowrate through the system is often dictated by the end user/owner of the pump. Based on the required flowrate, the amount of head required by the pump can be determined by calculating the system losses in the piping network. Rule of thumb estimates and outright guesses of the friction losses will lead to poorly sized equipment that will have a poor efficiency, but often more importantly a poor reliability. Calculation of friction losses in a piping system is thoroughly documented in many textbooks and reference sources, and will not be dealt with in detail here. An excellent source for the data needed for these calculations is the Cameron Hydraulic Data book, published by Flowserve Corporation. Additionally free on-line pump system calculation tools are often available at individual manufacturers websites as well as sites such a www.pumpflo.com. These tools make it relatively easy to calculate the head requirement for a given piping system configuration. Failing to invest the short amount of time required to calculate the head requirements at the beginning of the process is often the source of years of frustration, hundreds of wasted man hours, and large sums money to correct the problem after the fact.

Calculation of the system losses at several different flow rates will yield a system curve. System curves represent a loss of energy in systems with a variation in flow rate. Or, stated differently, the amount of energy the pump has to create up in order to operate at a flowrate. The system losses come in two forms that are outlined below.

These losses are due to changes in pressure and or elevation from the inlet to the outlet as shown in figure 1. The supply tank is open to the atmosphere so it has a pressure of 0 psig. The discharge tank has a pressure of 15 psig on the liquid surface. 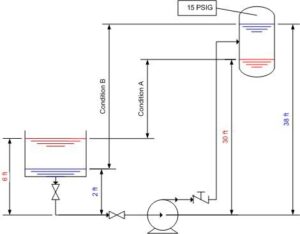 Our first task is to convert the energy level in the liquid from units of pressure to units of energy of Head. This is accomplished using the equation below.

The difference in the pressure static head for the above system would be: 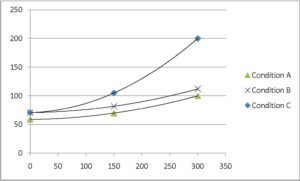 A second source of static loss is the elevation change from the suction tank level to the level in the discharge tank. Static losses are independent of flow rate. Please note that the static elevation head is the difference between the liquid levels not necessarily the levels of the suction and discharge tank fittings. The static elevation head from the above diagram for Condition would be:

So our total static losses are:

This represents the amount of head that would be required from the pump before any flow could happen. If a pump was selected for this system, and it could only produce a maximum head of 58 ft there would be zero flow in the system. The pump would just spin until it overheated and burned up.

The second part of system losses are the dynamic losses. Dynamic losses are dependent on the flow rate through the system and primarily attributed to the system friction. This includes friction of the liquid flowing through the pipe and fittings as well as the friction internal to the fluid itself. This starts out at the level of the total static head and increases with flowrate. Combining these two we get the total system loss. If we calculate the total system loss at multiple flowrates we obtained a system curve (see figure 2). 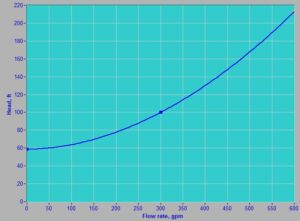 Many engineers calculate a system for one set of system conditions; this does not show the whole picture. As we pump the suction level drops and the discharge level increases, the change in levels from Condition A to Condition B (see figure 1) causes a subsequent change in static head. This is represented in figure 3 shown as Condition A and Condition B.

Similarly we can see that if we have an increase in dynamic loss such as the throttling of a valve on the discharge or fouling of the pipe over time, it can increase the dynamic resistance causing the system curve to bend upwards more rapidly causing a reduction in flow rate through the system (Condition C).

In conclusion, it is critical to design a pump station in conjunction with a system curve, rather than selecting a specific flow and head for the pump. The flow rate will vary due to the fluctuating liquid level in the wet well. Further, the friction head will increase over time due to build-up of grease or other material in the force main, resulting in a lower flow rate. When Jensen Precast designs a pump station, we look at the whole system curve and select a pump that best meets the current and future system characteristics. We select a flow rate that will give you a desired velocity (3fps-8fps) in the force main, thereby ensuring that the piping is being scoured and the entrapped air forced out. The result is a pump station that will operate properly for years to come.