Often in the sewage or wastewater industry impellers are designed with a minimal number of vanes to allow particulate to pass without fouling the impeller. Some designs have only one vane that wraps around the impeller. More commonly, two and three vane designs are used to improve performance while still allowing the passage of solids. A common and criteria for this style of pump is that it can pass a 3 inch diameter solid without fouling the pump. This requires that a three inch marble can be rolled through the impeller passage without becoming stuck. Be aware that many of the new higher efficiency multi-vaned impeller designs can no longer pass a 3 inch solid. If that is an important criteria for your application be sure to check with the manufacturer to see that the pump can pass a actual 3 inch spherical solid. Generally, these impellers are of the closed impeller design. This allows them to maintain clearances in abrasive environments without the need of continuously replacing wear plate and impellers. 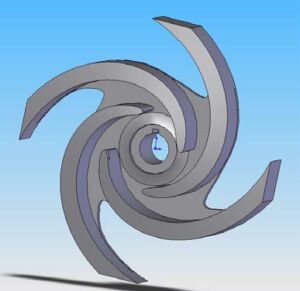 Open impellers do not have a front or a rear shroud; this allows debris that might foul the impeller to be dragged along by the impeller, rubbing against the front and rear stationary wear plates, grinding down the particulate to a small enough size to pass through the impeller. This works well with soft particulates but generally causes too much abrasion on both the impeller and the wear plates if the particulate is a hard compound compared to the impeller material.  Another disadvantage for this style of impeller is the need for the impeller vanes to be fairly thick. They must have the mechanical strength to support themselves under the stress of pumping the liquid. This added thickness and results in a decrease in the flow area. Additionally the clearances, at the front and rear of the blade where the hub and the shrouds would be on a closed impeller, result in a leakage in the impeller. This leakage is very dependent on the clearances between the impeller and the wear plates. As the pump wears over time these clearances increase and further increase the leakage losses degrading the pumps efficiency and often the flow and head levels. An advantage of this style of impeller is that they develop almost no axial hydraulic thrust loads due to the lack of shrouds. They are also easy to manufacture due to the lack of cores which makes them less expensive. 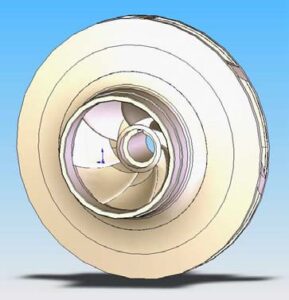 Also called enclosed impellers, closed impellers have a shroud and a hub surfaced attached. The surfaces have several advantages. They eliminate the leakage losses across the vanes. They provide strength and stability to the vane allowing the vane thickness to be reduced and increasing the flow area through the impeller. The two shrouds also provide and axial thrust balancing surface from which the pressure differential can be balanced. The obvious disadvantage to this form of impeller is that if the debris that enters the vanes and is too large to pass through the impeller it becomes stuck and must be removed by hand. This is often referred to as de-ragging in the wastewater industry. It requires the disassembly of the pump which is time consuming and costly. 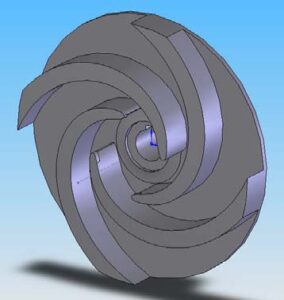 These impellers have only one shroud on either the front or the back of the impeller. They have some of the advantages of each of the other styles, and their own set of drawbacks. Thinner blading and reduced leakage losses because the fluid has only one leakage path over the blade make them more efficient than fully open impeller designs. The one face of the semi-open impeller being open allows them to pass particulate that would clog many closed impellers. Their major disadvantage is the fact that they have only one shroud that fluid pressure builds upon. The differential pressure across the impeller can cause extreme axial thrust loads putting excessive stress on the bearings or requiring thrust balancing techniques that increase leakage losses or power consumption lowering the pumps overall efficiency. (see Thrust balancing).

Vortex impellers are a subset of the semi-open impeller style. Instead of trying to minimize the impeller front clearance, the impeller is intentionally mounted towards the rear of the casing cavity allowing a large gap between the rotating vanes and the front of the stationary casing. Often this gap is the size of the discharge port. The concept is that the spinning impeller creates a forced vortex out in front of the impeller. A low pressure core forms at the inlet, and speed and pressure increase as you move outward radially until liquid is thrown out the discharge. The advantage is that particulate can pass through the pump without having to physically pass through the impeller. This allows these pumps to pass problem liquids that have a larger amount of particulate or fibrous material without binding or clogging the pump.