Not Your Typical Lift Station

Precast concrete engineered pump stations might be considered off-the-shelf components common to many wastewater and stormwater systems. The Los Angeles Department of Water and Power wanted something else.

So when P2S Engineering Inc. contacted Jensen Water Resources to design a custom system for LADWP, they knew they were tapping into a reservoir of knowledge gleaned from years of developing standard pump stations and crafting value-added solutions. This was not your typical pump station. The station is a small part of a huge project – a $104 million demolition and decommissioning of four massive, aging power supply units at the Haynes Generating Station in Long Beach, California. The work would prepare the site for new clean energy technology for the future.

“There was a lot of back and forth on the front end and back end of the design and delivery,” Salter says. “LADWP has been very detailed in all the information they’ve given us, and we’ve been just as responsive as we can possibly be. It’s been, in a way, complicated to work on, but also very easy because they’ve been very detailed.”

The typical pump station features a precast concrete wet well to capture and contain sewage or stormwater, then a host of components to move sewage or stormwater through the system and service it down the road – valve vaults, access hatches, submersible pumps, piping, fittings, control panels, and fluid level sensors. LADWP needed all that and more. 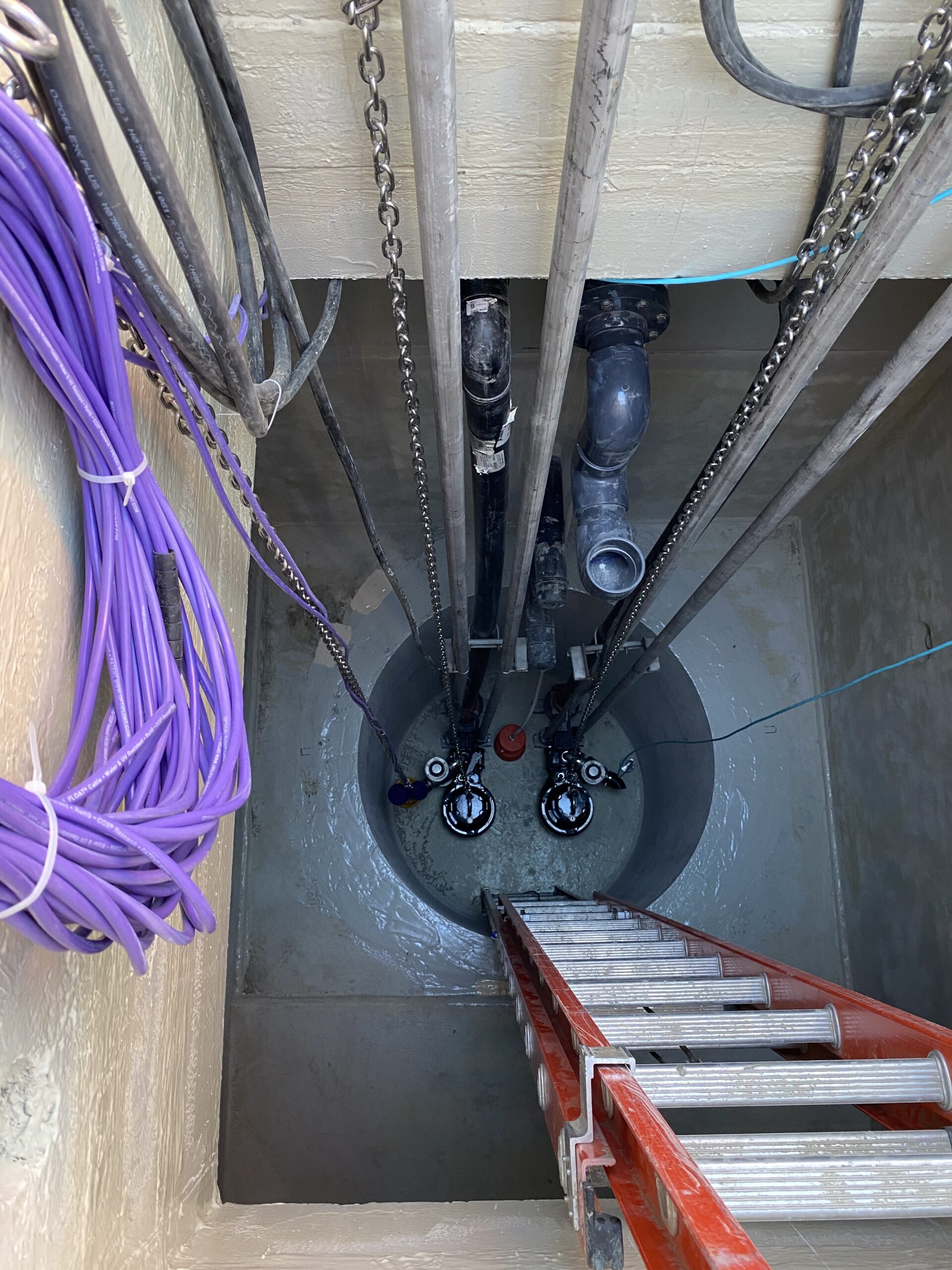 “LADWP did not want a cookie-cutter pump station,” says Christopher Purdie, Jensen Water Resources Pump Station Product Manager. “They had some storage volume requirements for the wastewater, so instead of doing a classic wet well, they actually wanted a large storage tank with a sump underneath it. Moving the pumps outside of the wet well into a sump created a host of different challenges from an engineering standpoint, from a design standpoint, and ultimately from a constructability standpoint. But at the end of the day, we worked with P2S and LADWP to finalize a design they were happy with.”

Locating the sump under the storage tank enabled the Jensen Water Resources team to provide a system that could hold up to 8,000 gallons.

“That’s a fairly unique design for a pump station,” Purdie says. “Most pump stations aren’t designed to have much storage. They typically discharge as they fill up. This one was unique. In the event of a power outage, LADWP wanted a few thousand gallons of emergency storage. It’s a good-size tank and it allows them to store sewage and not have it back up into buildings should the station go down for any reason. It’s pretty critical.”

Walter Kurzeja, Senior Construction Program Director for TRC Solutions, was also intimately involved in the design. He says there were many components to the demolition project, one of which was an old maintenance building serviced by a lift station. TRC demolished the old building and then provided a temporary tank while the new lift station was under construction, enabling a new maintenance building to be occupied two months early. 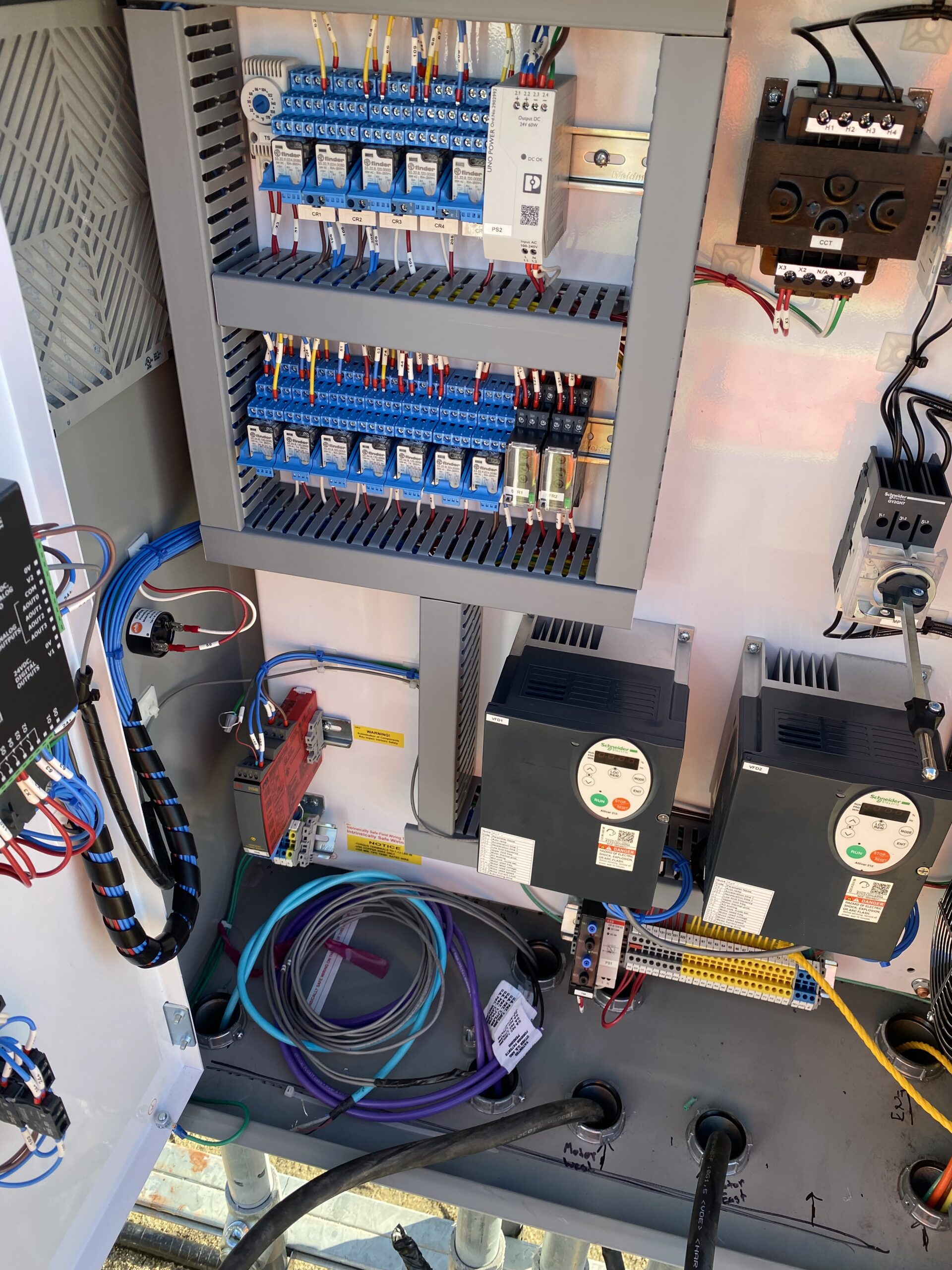 “The thing that complicated it the most is the way we sequenced the job,” Kurzeja says. “Then we had to do the crossover to the new tank and remove the temporary tank.”

It was a complicated project with the usual twists and turns. In the end, though, everything worked out well.

“It’s the largest lift station I’ve ever installed, that’s for sure,” Kurzeja says. “I liked working with Jensen Precast. They did a very good job with the design and the castings and everything along those lines.”

The new system should last well into the future too. With the custom design, it was important to be able to make it easy for service technicians to access the pumps.

“One thing we pride ourselves on is that our stations are not part of planned obsolescence,” Purdie says. “We want our lift stations to be serviceable and to be able to replace the parts on them over time.

“One of the more important features of our submersible pump system is that it comes on a slide rail assembly to lift that pump out to the surface. You don’t need to go down into the wet well to disconnect the pump or anything like that. The pump is connected to a chain and that chain is hung up near the surface where the access hatch is so an operator can hook that chain up to a small crane and lift the pump out.”

Once the contractor completed the installation, Jensen Water Resources delivered another value-added service: sending a startup technician to the site.

“It’s an important part of what we do,” Purdie says. “Once the station has been installed by the contractor, we provide a day of startup and training. One of our factory trained pump technicians reviews the installation, tests the pumps, and provides training to the maintenance personnel and/or the owner at the project site. That’s a service we provide with every pump station.”

Once or twice a month we'll send you JP News with industry content you can use.